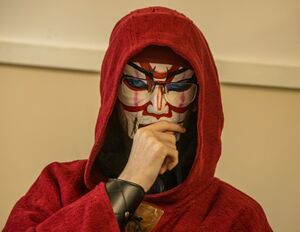 There is also a rumour that would suggest that Tempus is actually the name of the mask, and that the personality known as Tempus is the personality of the mask, similar how each harlequin mask is differnt. This idea is difficult to prove, given Tempus's unwillingness to remove his mask, as it "keeps the thoughts in".