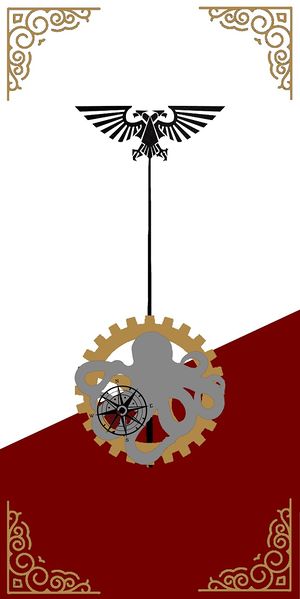 Lady Navigator-Captain Victrix Raltus of House Kasputin: A very young Navigator of curious heritage and recently adopted by the Kasputin Dynasty for “reasons”, Victrix is a determined and headstrong Navigator with a new burden of responsibility on her inexperienced shoulders. An existing member of the ship’s main crew, she is determined to prove herself and her field crew worthy and capable, and takes the welfare of her crew very much to heart. Was killed, resurrected and taken control of by a Demon whom the dynasty now hunt.

Stormtrooper Captain Nathaniel Reginald Carruthers Cartwright III: Stormtrooper Captain Cartwright is the commanding officer of A Company, 42nd Brittaniccus Long Range Reconnaissance Regiment. To Victrix, he is invaluable as her Second-in-command, and irreplaceable as a friend. After the event of Victrixs' capture he inherited the position of Lord Captain as stipulated in Victrixs' will.

Unit 343-τω1Gj4κ “Twigjack” - (Pronounced: Unit 343 Tor Omega One ‘Gamma-J’ 4 Kilo): Once a Skitarius used for infiltration and assassination, now broken from command protocols, Unit 343 “Twigjack” is an autonomous, free-thinking individual, fond of long walks on moonless nights and practicing violent evisceration upon the unsuspecting or adversarial (and also winding up the Lady Raltus for “data-collection purposes”). Destroyed at the same time of Victrixs' capture, remains are currently scattered across the system and in 3 buckets at Data-Smith Merezhkos' workstation

Data-Smith Merezhko: Attached to the Kolchian 14th Siege regiment, as Oberarzt Schwarzekappel is the only remaining officer of the Regiment he has doggedly followed him into service with the Kasputin Dynasty .

Oberarzt (Lieutenant-Surgeon) Azrael SchwarzeKappel: A superbly skilled surgeon and a trained reserve demolitions specialist from the disbanded Kolechian 14th Heavy Siege Regiment, known for a distinct fatalistic obedient demeanour with deep rooted habits and attitudes. Was made XO of the Kasputin Dynasty upon Cartwrights ascension to its Captaincy.

Lt.Col Robert "Black Bob' Ponsenby: Another Britannicus Officer, commanding a battalion of the 50th Britannicus Heavy Infantry, sent to the Conception of Hope in accordance with ancient treaty between House Kasputin and Britannicus Regimentos Command.