Difference between revisions of "Capt. Cartwright" 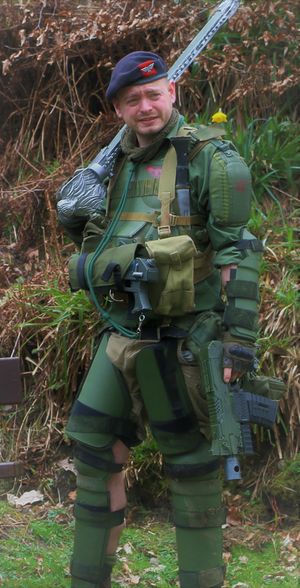 Notable Traits:Generally quite, observing those around him, tends to become more vocal when in combat or inebriated

Is on attachment to the Kasputin Dynasty and is technically still a serving member of the Astra Militarum.

Was on the Conception of Hope, a Rogue Trader vessel that was trapped in the warp for around 100 years, though only a matter of weeks passed for those onboard.

Currently serving as the Lord-Captain of The Kasputin Dynasty whilst he attempts to find and retrieve Victrixs' soul from a certain Demon.

13th Child of Governor Elizabeth Cartwright, Planetary Governor of the Civilised World of Novabralter in the Britannicus Cluster. Despite having both parents still alive he was sent to the planets Schola Progenium.

"If the Arbites or local law enforcement come calling, I don't know him" with regards to Twigjack

Inspirations:A Bridge Too Far, The Longest Day, Zulu, Ice Cold in Alex. The bugnuts insane stories of family members who fought in WW2

Soundtrack:Two Cellos - The Trooper, Wagner - Ride of the Valkyries,