Rusev grew up in the underhive of Chrernobog, a backwater Hiveworld, and was taken in by the Borovich Family at a child. Later served in the Imperial Guard Penal Legions and has a serious dislike for Arbites and the Administratum. Known to fight for workers rights over authority figures. 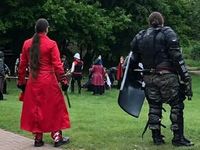