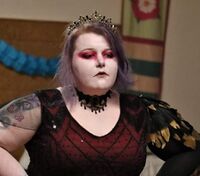 Severina has a long service record of postings serving the officio medicea across several theatres of war, mostly among imperial guard regiments, as well as at one point serving among the medical retinue of an Inquisitor. she was requisitioned to serve the Gius dynasty as chief medical officer, after the disapearence of one lord captain and death of his successor Severina was reluctantly thrust into comand of the nightfall. Lord captain of the Gius Dynasty and master Chirurgeon Severina is slowly growing into her new role as a rogue trader. She'd still rather be in a medical bay than a comand deck, and in her off time is known to run a clinic providing medical care and cosmetic improvements to the varied residents of arkangel. seems to be both as equally fond of attempts at diplomacy as she is a fight. her research can sometimes skirt worryingly close to mad science but her surgical skills and compitance seem to distract from this.