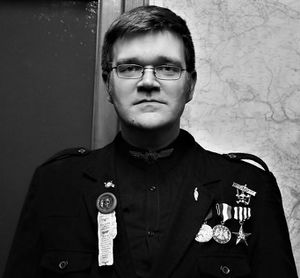 Mac Malvoisin ("It's pronounced 'Mallen'") is Lord Captain Sireena Cerastes' right-hand, or perhaps more accurately left-hand, man. His main tasks seem to be exploration, investigation and reconnaissance. He has people skills, for a sufficiently loose value of "people." Mac spent a long career in Departmento Munitorum intelligence doing one shady job after another, and although he may technically no longer be on active service, it's generally understood that Mac still knows some people who know some people.

Mac comes from a respectable family on an unspecified Imperial world: both of his parents were officers in the Imperial Guard