Difference between revisions of "Spider" 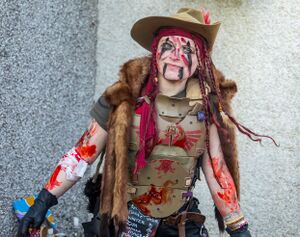 Her people aren't much for titles; in fact, amongst at least two of the Drifter Fleet's most populous subcultures, giving someone their full and proper title is difficult to do without sounding sarcastic. Her people mostly call her Spider Daisy (Daisy for short), while the worthies of Arkangel generally know her as Spider.

Notable Traits: Red bandana, feathers in her hair, frequently some kind of face paint. Her armour and outfits look handmade and pieced-together from wide-ranging travels; furs from species that even she will cheerfully admit she doesn't know the name of, Imperial Guard dogtags, lots of knives, bits of shell she claims are from 'the psychic clams of Sidion VIII', etc.

Something like an Arborian accent, but not a strong one, and one that's undergone a certain amount of drift over the years.

Imperial sanctioning brand on the top-left of her chest. Phoenix tattoo on right arm. Copper-brown Idyllorian bionic where her left arm used to be.

Spider has a lot of stories that tend to come out when she's had a few. She landed on Hera, fought in the Hypatian Crusade, helped avenge the destruction of her planet, and helped her people remain a people through through both the loss of their homeworld, and the subsequent loss of their last remaining leadership... and she's also got a lot of lighter material, largely concerning encounters with strange and exotic critters and/or the consumption of large amounts of intoxicating substances.

Spider belongs to the Arborians, a loose-knit collection of voidfaring nomadic warrior tribes found within the Ruhort Sector and on the edges of Imperial Space. The Arborians and their sister tribes make up the Drifter Fleet, an eclectic spacebourne collective of peoples and individuals faithful to the Imperium, but without a place within it to call home. She describes her role amongst her people as 'Shaman', although it's far from immediately clear what that means.

She's ex-Guard, and has served as an ordinary Trooper, a scout, an officer in a Recon division, and in a beyond-the-Line special operations search and rescue unit. Today she'd describe herself as a warrior and a hunter, which amounts to the same skill set. Oh, and she's also a psyker. She seems to enjoy that people actually forget that, whether because she doesn't look like one stood next to some of the psykers you get on Arkangel, or because honestly it's one of the least weird things about her. In general, she gives the impression of taking the horrors she's witnessed and experienced in the Imperium with a cheerful or at least sanguine acceptance of their necessity, and of being deeply faithful in her particular colourful fashion. 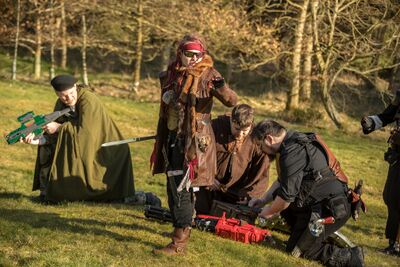 Lord-Captain Summers on the battlefield

"Let it be known that Spider Daisy has the Emperor's mandate to lead, in the form of a Warrant of Trade, and intends to find us a new home. Arborian, Minervan, Idyllorian, Esramiran - every lost yet Faithful child of the Emperor; every brother and sister in eternal Walkabout - is invited to follow me."

Prior to events aboard the Ingamar vessel, those in the know might have described Spider's status within the Drifter Fleet as foremost among the leaders that it did not, technically speaking, have.

Taking her unexpected ascencion to the rank of Rogue Trader as a sign of the Big Man's favour, Spider Daisy called upon the Fleet to follow her, and in so doing, claimed leadership of the Drifter Fleet. This is a station no-one has held since Shane-O made a similar call to follow him into the void. The Last Governor, along with over half the Arborian people, was never seen again.

In the fifty years since, Arboria has made back its numbers - but it never regained its position as the unquestionable majority of and driving force within the Drifter Fleet. It became a patchwork of peoples, held together by, but never officially ruled by the network of shamans, of whom Spider Daisy is the most senior in more ways than one.

The Drifters on this side of the Maw have come to heel, with a fervent few pledging to carry the message back with the Celestus and return with the rest of the flock.

By now, most of the medics aboard Arkangel are aware of Spider's particular awkwardnesses as a patient, namely:

that Spider is, on the inside, somewhere between thirty and forty percent composed of half-rusted-out bionics whose quality can best be described by imagining the amount of money the Imperial Guard cares to spend on a psyker, then remembering that most of them are over 100 years old and don't get serviced that often

that she has minor brain and extensive nerve damage dating back to her Sanctioning aboard the Black Ships, dulling her ability to feel pain. This is perhaps beneficial in the heat of battle - it avoids pain-induced loss of control of psychic powers, for one thing - but for the medics, it's annoying, as it means she will often fail to realise the severity of her injuries.

Her stepsons Bruce and Azzie are Arborian Free Company mercenaries, as was her husband Jason before he passed.

Fred the Nerd is technically her oldest friend. He really hates being called that.

Seems to have taken the 'the psyker' of the Rexuz dynasty, Tempers under her wing. He has lately been seen wearing a red bandana and drinking a noxious concoction out of a blue and yellow tin.

It was Lord-Captain Rexuz he ended up working for, but when the God-Emperor first marked mild-mannered Dockworker Al to greatness, it was Spider to whom He first brought him. The two seem to have remained close, despite their divergent notions of the Emperor's 'mercy'.

Introduced the Port Minervan mercenary Lenno to the impolite society of Arkangel. The two seem to go back a ways.

Damo McCoy, aka Baby Doc - well, they're definitely up to something. Even if she is old enough to be his grandma.

Inexpertly flew a stealth lander into the wilderness of a Necron planet to retrieve Carters after he went walkabout. Was later appointed Colonel for Scouts and Psykers under the Lord-Commander of Imperial Guard forces beyond the Maw.

Was given a Warrant of Trade and a pleasure yacht by Ana. How Spider's Lord-Captaincy plays into the schemes of Navigatorial House Ingamar is, as yet, unknown.

The Navigator of House Cerastes recently returned from adventures with the Lord-Shaman covered in warpaint and someone else's blood, and word has it that Arkangel tailors have received inquiries about the creation of a red bandana with a third eye sized flap in the middle. 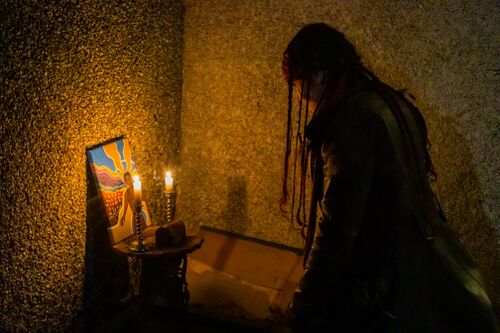