Difference between revisions of "Skyfall"

Notable Traits: Long, wild reddish hair, neon clothes, particularly pink and yellow. Red warpaint, or sometimes blood, striped across her cheeks. Don't sit in her seat. She might bite you.

Titles: Wild creatures don't tend to go in for titles, but she has recently inherited the Charon's Thunder warrant on the death of her adopted father Through Boiling Clouds of Thunder.

Skyfall being told off for biting Macro 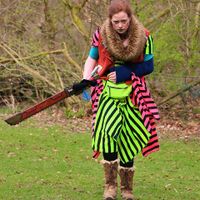 Skyfall arrived unexpectedly on the planet known as Garm's Leap, emerging from the darkness at around midnight. She was dirty, bloody, improperly dressed for the cold, and limping. She seemingly had limited Low Gothic and limited other means of communication. It was apparent that she had heard the sound of the drop bar crashing to earth, and had followed the lights looking for help.

It was quickly established that she was in fact a very powerful psyker, and with some recognition of the Aquilla and her speed at picking up their language, it seemed she was not born here, and had once perhaps been familiar with Imperial society.

She had no name, and decided she would earn one. This occurred swiftly when Anahita gave her the name she bares for stopping a lander crashing and preventing someone jumping off the side to their death.

Skyfall's origins are mostly unknown. She has shared almost no details of her past, and in fact it seems she may remember very little. She claims she fell from the stars when she was a very little girl, and before that she lived on a big ship, where she was alone a lot, attended to by strangers rather than her parents. Some believe this means she was of high noble birth, others have speculated that perhaps, even at a young age, people suspected what she might eventually become and kept her apart for safety.

Shortly after being taken to Archangel Sky spent many weeks aboard Lord Captain Tollman's ship, and returned notably quieter, baring the brand of a sanctioned psyker, and with far better Low Gothic.

Over the last year or two Skyfall has set about proving herself in battle as a warrior and a witch, including taking a key part in the destruction of the Moth of Ruin, tearing it's wings off with her mind.

Recently the Rogue Trader crews responded to a Mechanicus distress call on a seemingly abandoned world. There they found a planet inhabited by Necrons, and a mad Explorator Arch Magos intent on a course which would unwittingly destroy six sectors and hundreds of millions of lives. Thunder thew himself into direct combat with the Explorator, and while he managed to kill him, Thunder was terminally wounded in the process. He chose to die on his feet, to the blades of his own crew, rather than allow himself to succumb to his injuries. This left Skyfall as Lord Marshall.

Through Boiling Clouds of Thunder - One of the first people Sky came into contact with when she arrived. He protected her and took her under his wing, seemingly without question. Sky clearly utterly adored him and would have followed her Lord Captain anywhere. How she will respond to his death is unclear, but considering it took several hours to coax her away from his body, circumstances suggest not well.

Erasmus Bloom - A wonderfully good and bad influence. A mischievous brother, one to gossip and explore with. A mind to be reckoned with.

Lytling Ddraig Aur - Her more reliable and sensible brother. A strong warrior, and kind soul who has adopted her into his house.

The Dancing Spectre - Newest friend. Still a confusing and new presence. But they are supposed to be here, Sky knows that.

Michael 'Brutus' Moreau - Not afflicted. A great warrior. He will be great.

Rusev - The two are clearly... close.

Sky is really some form of princess.

Sky is the heir to a forgotten Rogue Trader warrant.

The wild girl thing is all an act, and she's really a highly wanted criminal using this as a way to hide from the authorities.