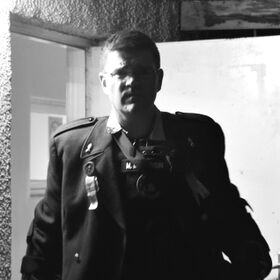 Mac has a perverse sense of humour and a thirst for new sensations. He's known as a connoisseur of cheap, spicy food. Although he outwardly seems to view the Imperium and its rules with a sort of affectionate cynicism, he has moments of sincere piety and unconscious traditionalism. (One effect of Arkangel's unique social environment is that this attitude, which would be wildly rebellious within the hierarchy of the Guard, makes Mac something of a conservative on Arkangel, or at least a comfortable moderate.)

When family business called Sireena back to Imperial space, she entrusted the Stranger and its mission to her first officer. Mac accepted the task dutifully and set about recruiting a new team of agents. Since then, he has developed his own style as Lord Captain, a hybrid of Cerastes traditionalism, military pragmatism, and his own idiosyncratic instincts.

Mac typically takes the field armed with a regulation-issue chainsword, affectionately dubbed "Ol' Chainy," and an evilly-glowing xenotech fetter pistol, but he also owns a seemingly endless supply of cheap, disposable stub pistols. In combat against Fuga Animi, he lost the use of his right arm; it remains to be seen how the injury will affect him. 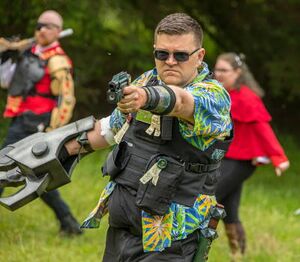 In addition to the members of House Cerastes, Mac seems to have formed a relationship with Rafi.